Hi, as I said in my introduction I am trying to repair my dad's Tandberg TR2040. He bought it used and unfortunately some of the previous owners did some modifications(speaker connectors, RCA input connectors, crappy LED's) to it that I don't like but they probably don't have anything to do with the problem that the receiver has.

From what I could see there are 2 problems both in the power amp stage. Sometimes the DC voltage on the speaker outputs of both channels with no input signal is relatively ok and stable at around 20 mV but sometime one channel would be at around -200 mV with occasional few hundred mV jumps. This makes sometimes the output relay disconnect. Mostly after warming up this DC offset is gone and both channels would be working ok if it wasn't for the fact that maximum peak to peak voltage before clipping is around 9V which is too low as rails are +/- 40V. That is the second problem.

I think both problems are related to voltage amplification stage. I'll attach a part of the schematic. When there is a DC offset I can measure on Q703(BD420) that it conducts in both directions between base and collector but I am not sure if it is because that transistor is shot or because of Q707(MPSA13). I don't really like how Q707 is mounted, its legs are loosely in connector where connection could be problematic and transistor is stuck between output transistor bracket and heat sink. I cleaned the connections but that didn't help.

I can of course remove both transistors and measure them to check but as the problem is intermittent I plan on replacing them both in both channels. While MPSA13 is cheaply available at Reichelt, that is not the case for BD420 . Do you know a modern replacement for BD420?

I believe other TR series models use similar old Motorola transistors so somebody could be familiar with replacements.

When both channels are working good and I input 1kHz sine wave, the output looks quite ok with no distortion and amplitude increase with volume increase but the maximum amplitude of only 9V before clipping. What could be reason for so low voltage before clipping? Maybe I should mention that I use 8 Ohm resistors as dummy load. 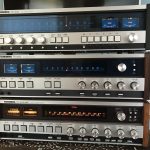 The MPSA13 mounting is not fantastic, but it works. It's the same type of connection in all TR20xx. As long as transistor legs are clean and 'spring' in the connector works - it works well. You may check connector by using a small pin, you should feel the connection moment. Check/replace the R723 ( 100 or 220Ohm ), usually it does not work after so many years. If all is OK It can be a problem with the BD420. I didn't find any good replacement, but it's sometimes available on ebay.

Thanks for the suggestion, I replaced this trim potentiometer. Although it measured fine after I removed it, probably is a good idea to replace it anyway. As I was able previously to set the bias with this pot I supposed it was not the cause of the problem.

I replaced also the BD420 with a similar transistor that I could find locally which was BD140. Pinout is not the same so I had to twist 2 legs to exchange the positions. From short testing that I could do, the DC offset is not not so bad around 25-30 mV and no weird behavior. I will do some more testing as problem was previously not always present but it seems that the first problem is solved.

The second problem still remains, I still get only about 9V peak to peak. If it would be on just one channel it would be easier to troubleshoot but it is exactly the same on both channels.

Hi Pawel, yes those are the ouput transistors

I'm jumping in late, not sure if I can be of assistance.

I was going to recommend substitutes for BD420 but it seems you solved it. I have not done this myself but my notes say BD420 ⇒ BD390 BD530 BD830. However you already fixed that.

It puts out only 9V on both channels, if I understand correctly..
How you tried to feed a signal directly into the power amp to eliminate the pre amp?
Have you measured power amp rails as output increases?

Hi Jens, that is correct I have 9V peak to peak on both channels when output starts clipping. I measured the rails during clipping and they stay fine at +- 40V.

I tried replacing output transistors with BDX67C/BDX66C on one channel and also replaced MPSA13 but that didn't change anything.

I didn't try feeding the signal directly to power amp as I traced the 1kHz sine wave that I use at input through the preamp and it looks fine.

I will replace differential pair transistor 2SC1583 as a matter of precocious as I can see legs are black and Pawel already had bad experience with it. I will probably use 2 matched transistors that I could easily find. It would be though strange to me that this could cause clipping far below rail voltage.

Any other ideas are welcome.

@peca
I am working on a Sansui G-5700 now that has a similar problem, it clips above a certain level. But only on one channel. Still haven't figured it out. But your problem is more intriguing, it's on both channels.
You are sure there's nothing wrong out of the pre amp? I had problems with the silent switch circuit IC on my TR-2025. Weird, right? Although I have no experience of the TR-2040, it seems it has that IC too. A long shot in your case, no doubt.

What kind of clipping do you have?

Well it seems like I have a very special clipping...an imaginery one 😆

I bought today a second hand Rigol scope to replace a USB Hantek that I was using until now and there is no clipping at low voltage.  It starts clipping at 65V peak to peak or something like that but definitevely no problem there. There was no problem with the amplifier only with the scope 😤

So now that is sorted I can put back some of the transistors that I was replacing during troubleshooting. I will still replace 2SC1583 with new ones or matched pair.

Then I'll go on with capacitor replacement, in power amp I already replaced them, next will be the preamp and power supply. Any recommendation for power supply capacitors?

I would also like to replace the bulbs with LED so if you have a recommendation I would appreciate it.

@peca
That's great! It's working then.

I haven't replaced power supply caps in a TR-2040, but I see it says 2x4700uF on the schematics.
It is a personal preference, but I like to use leaded capacitors, not the solder tag type, because then I can use existing holes (no drilling and messing). Of course, this type generally is lower value, but it doesn't matter because then I use a couple of them, make a little capacitor bank. I believe there is advantages with this arrangement as well, regarding ESR perhaps and heat.
I might put 4x3300uF here, or something like that. Or just go with the original 2x4700uF.

I have no LEDifying experience as I personally like good old bulbs. I even refuse to use LEDs in my home and have stacked up a huge pile of incandescent 240V bulbs.
I'm such a reactionary!

Bulbus, no easy to find , but still possible ( the same are used in the flippers). You may find some useful info about it in this forum . I have a few so may mail you if you want.

Capacitors are silver Siemens. If I could trace well the source of the noise they are buzzy at higher power output. I ordered some Nichicon VY 10000uA/50V, that was the best I could find locally.

Bulbs are T10 type, I think they are not too hard to find LED or incadecent. I prefer LED, will let you know how it turned out.

Thank you very much for the offer Pawel but I will find some for sure.

@peca
For lamps you can check Legantec24 or papaudioparts on ebay (if you are in europe). I buy lamps from them. Relieable sellers with quick shipping, although not cheap, but lamps are not a big expenditure anyway.

I buy capacitors from Mouser. Can warmly recommend them, superb service.
If you work on hifi electronics, even just as a hobby, I recommend Mouser, or there are others like Digikey (I have no experience with them). Also in Europe Reichelt was very nice to buy from, can recommend them.

@peca OK, just remeber that you have 6V AC at Tandberg 🙂

I am in Graz/Austria so I buy from Conrad when they have parts in offer because that I can pick up in store directly without shipping fees. Else I was ordering from Reichelt and Mouser. Surpisingly Reichelt now didn't have any 10000 uF caps. I was about to order from Digikey but the shippment would come from US so I wasn't sure about import charges.

I asked papaudioparts if they can amake an offer for Tandberg so 6x T10 LED and miniature bulb for FM scale pointer.

Pawel, actually at the moment I have 6V DC at the bulbs because some of the previous owners did some crappy modifications 🙂

No online members at the moment